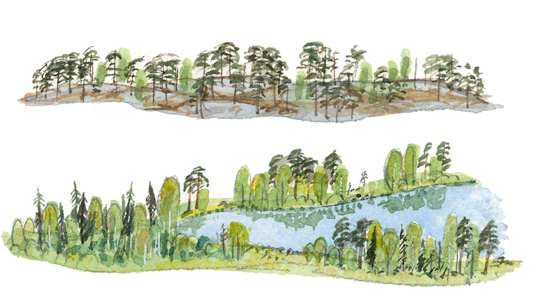 Conservation patches encompass buffer zones, wet hollows, outcrops of bedrock, steep rocky slopes etc. that have been set aside in connection to harvesting operations. These patches range in size from about 0.1 to 1.0 ha.

A basic prerequisite for effective nature conservation is a well-implemented felling plan.

Planning for harvesting is always carried out by highly qualified personnel at a time of the year when there is no snow on the ground. They walk systematically through the forest to be felled, and plan the areas to be set aside – the conservation patches.

They use a GPS, a navigation satellite system, to mark the forest areas to be set aside on a digital map. The purpose of the felling plan is to create a good reference in the form of maps and directives for the felling team, so that they know what has to be done.

The felling team holds a key role in the nature conservation process. The team determines the conservation objects to be saved, such as eternity trees, tree groups and small flushes, and how vehicles should be driven to avoid damaging the natural environment.

They use computers with digital maps and have a GPS in their forest machines, making it easier for them to see where they are working and to follow the felling plan.

Our forest operations are certified under PEFC™ and FSC®. At the same time, we have played an active role in developing objectives for good environmental consideration in forest operations. This has been carried out in cooperation with other companies, the Swedish Forest Agency and other players. In practice, the objectives mean:

When working at conservation object level, felling teams leave individual trees or groups of trees, of varying species and ages, to promote greater variation with different tree species and mixed tree ages in the next forest stand.

Each tree species that occur in a felling site must be saved in some way. We also save all dead trees and naturally occurring high stumps. In addition, we create new high stumps by cross-cutting three to five trees per hectare at a height of about three meters.

To avoid the risk of driving damage, planning for felling operations should be carried out on snow-free soil. SCA now uses its own method, called Gentle Effective Logging (SED). The method is based on avoiding driving damage by, in advance, identifying the best routes to drive timber to the delivery site along the forest road, and by laying extra brash mats along machine routes. If necessary, temporary bridges may also be constructed from timber or portable bridges used.

Preserving the biological diversity requires variation in the forest landscape. Our nature conservation measures vary during thinning operations, depending on the type of forest. In uniform, well-thinned young forests and heavily thinned older forests, we use thinning to achieve greater variation. In unmanaged thinning stands, conservation value must be preserved and sometimes strengthened.

Conservation patches, such as flushes, exposed bed rock, outcrops and ravines, must also be left untouched during thinning operations. Creating a stratified forest, with an abundance of deciduous trees around watercourses, is also important.

In stands dominated by a single tree species, we save divergent trees. If there are any spruce trees in a pine stand, for example, we leave the spruce.

Nature conservation in other forest operations

When planning for harvesting operations, we also plan the nature conservation measures to be taken during the soil scarification process that follows harvesting.

These include not scarifying flushes and avoiding driving over them. Neither do we scarify close to protective covers or buffer zones left around watercourses. We also avoid damaging the root systems of standing trees and high stumps.

Important nature conservation measures during pre-commercial thinning include leaving sallow, mountain ash and asp, and saving large numbers of deciduous trees in the buffer zones around watercourses. Flushes and small areas of marsh comprised of wetlands must not be thinned.

A cultural environment in the forest consists of ancient remains and other cultural relics. They are protected by various regulations.

Cultural relics in the forest can be divided into two categories:

Ancient remains include pit traps, old settlements and prehistoric graves. Ancient remains and the surrounding areas must not be damaged by felling operations.

Examples of other cultural relics in the forest are remains from driving timber down watercourses, heaps of stones cleared from the fields, stone walls, charcoal pits, tar piles and old cottages left by forestry workers.

All known cultural relics are registered by the Swedish National Heritage Board, and marked in SCA's map system.

Anyone who is planning a felling operation must always check to see whether the felling will affect any known cultural relics, and write instructions for the felling team and scarification equipment operator. Making a cultural relic visible by felling the surrounding trees is often a good idea, but the relic must never be driven over or destroyed.

We endeavor to show great care when working close to ancient remains and other cultural relics.

Consideration of recreation and outdoor life

We aim to show consideration our forest operations in connection to paths, hiking trails, running trails, wind shelters and natural gathering places. The forestry shall not affect the usability of paths, trails and structures clearly intended for outdoor life