SCA is the first operator in the forestry industry to introduce a warning system on soil scarifiers to protect ancient and cultural remains. When lights flash in another color, operators know their machine is close to remains and can make sure the remains are not damaged. “This is revolutionary and a major step forward in our efforts to reduce damage,” says Ulla Sandenér, head of SCA’s forest management department. 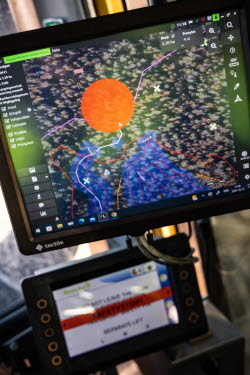 Ancient and cultural remains are at highest risk of damage during soil scarification, according to SCA’s follow-ups. However, dedicated efforts in recent years have led to a significant reduction in damage from soil scarification and in 2022, the results were the best ever recorded. This is largely due to the warning system that has now been installed on all scarifiers operating on behalf of SCA.

The warning system – a flashing light connected to the map in the machine’s computer – lets operators know when their machine is close to remains so they can avoid causing damage by driving over them.
“We have different alert distances for different remains – 20 meters for ancient remains and pitfall traps, and 15 meters for cold springs and wells. For all other remains, such as cultural environments, cultural objects, tar piles, charcoal pits and various types of tracks and trails, the distance is seven meters,” says Ulla.

“One of the best things about the warning system is that it works even when machine operators are looking at other information in their computers and don’t have the map with remains open.”

The idea to create a warning system for scarifiers was hatched a few years ago by some SCA employees who work with forest management development.
“Despite new procedures with better communication from planning to execution and carefully placed culture stumps and other measures, the rate of damage was still 5-6%. And that did not include damage to tracks. We simply wanted to improve and that’s when the idea of a warning system arose. We’ve also had good support from ForestLink, the technology used by the computer systems in the scarifiers,” says Ulla.

The warning system picks up all known remains in the map layer, as well as any remains that the site planner discovers prior to regeneration felling. There were no alerts for tracks at first, but after the first trial year, the operators were strongly in favor of alerts for tracks. Various types of tracks and trails were therefore added to the system this year.

However, there is still a risk that unknown remains can be damaged.
“It’s difficult to protect remains that you don’t know exist and that are also very difficult to see,” says Ulla. “For the areas where we know we have ancient remains, we changed our instructions this year. These areas can only be scarified in daylight, or if the machine operator has studied the area in the daylight. This also means that any unknown remains that haven’t been found by the site planner or harvesting team can be detected.”

Ulla is very happy with the results, even though the follow-up for the 2022 season is not finished yet.
“Up until mid-October, the rate of damage after soil scarification was zero for the ancient remains we visited for our spot checks. The figure for cultural remains was 0.3%, if we don’t include tracks. That’s an excellent result! But since we’re including tracks this year, the rate of damage for cultural remains is about 3%,” says Ulla.

Reactions from the operators have been 100% positive. No one finds the warning system disruptive,” according to Ulla. Mikael Danielsson, a contractor who runs Höga Kusten Sjöentreprenad with three scarifiers, has only good things to say about SCA’s new warning system.

“I drive a lot for SCA but I also have other clients, and none of them have introduced this system unfortunately. I am really happy with it. I don’t think I’ve had a single call from my operators this year with bad news about damage.”

It’s not always easy to see some types of remains, according to Mikael, and it is even more difficult for new, inexperienced operators. The system can provide extra re-assurance for them. The same applies to foreign operators, where language can be a problem even though all operational plans have been translated.
“With a system that both flashes and beeps, you can’t miss knowing that you are approaching remains, so my Lithuanian operators are more than happy,” says Mikael.
“It’s also great that tracks were added this year,” he adds. “It feels really good to be involved and helping to preserve the remains in forests.”

Anna Cabrajic, forest ecologist at SCA who has been working at overall level within SCA for several years to reduce damage to remains, is also very happy.

“The forest management organization has worked really hard to help us reduce damage. The warning system is excellent and combined with all the other things we do to strengthen our conservation considerations before soil scarification, we’ve really come a long way. SCA has a zero damage approach when it comes to ancient and cultural remains and it feels like we’ve taken a big step closer to that now.”