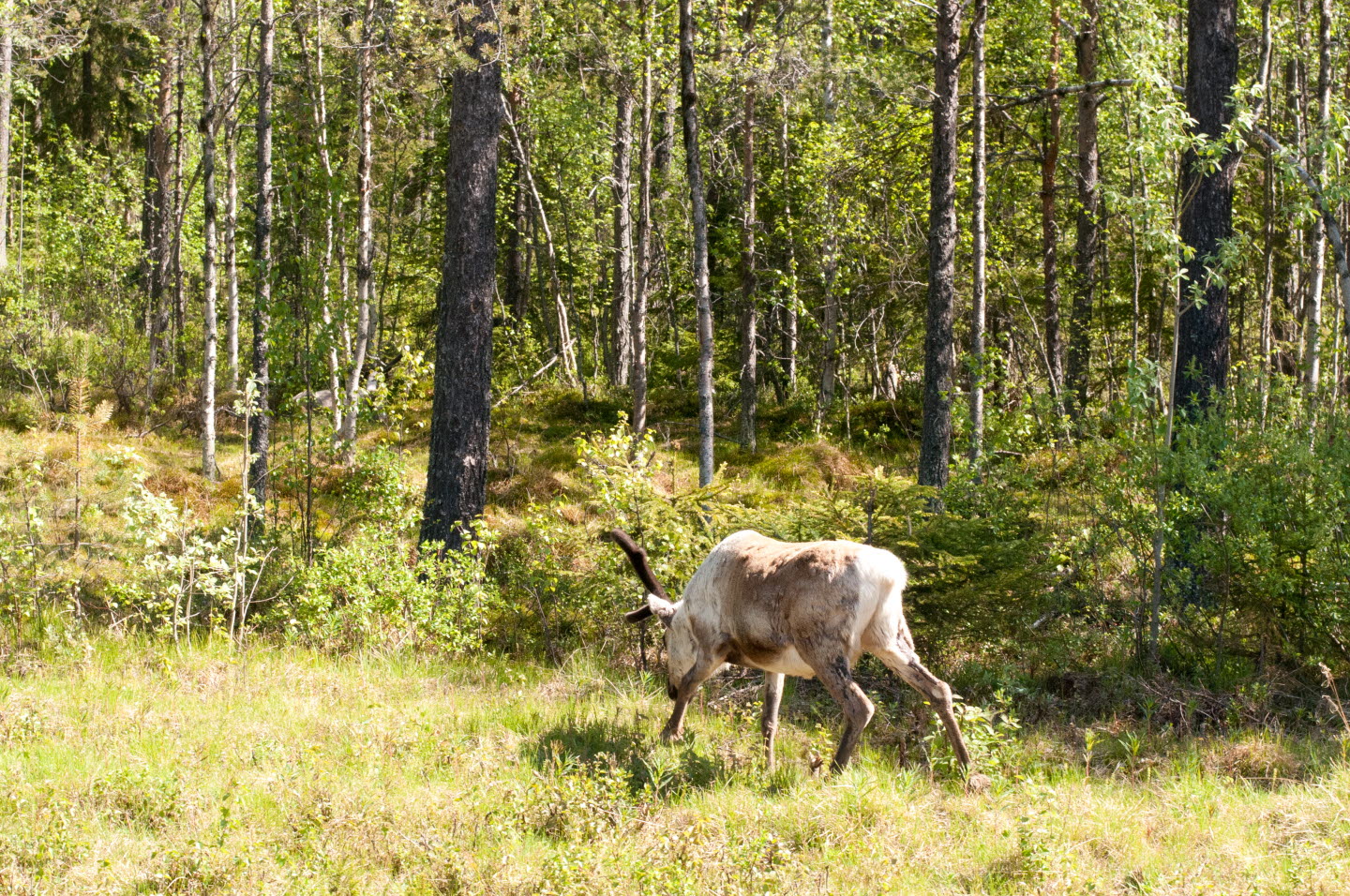 Consideration for the Sami people and reindeer husbandry

The Sami communities own the right to reindeer herding on SCA's land. It is important with a good cooperation between the Sami communities and SCA, so we both can continue with our businesses. Our goal is to find solutions that benefits both parties. SCA participate in consultation with Sami communities according to the Swedish FSC standard.

A Sami community normally encompasses summer pasture land in or near the mountains and winter pasture land down in the forest — in many cases all the way down to the coast. The reindeer have a natural yearly cycle, moving between summer and winter grazing. They are moved between these areas, either driven by reindeer herders or using animal transport trucks.

Reindeer herding is regulated by the Swedish Reindeer Husbandry Act. It regulates such issues as how many reindeer the Sami communities can keep, and the requirements for the consideration of reindeer herding that forest owners are obliged to take. In the summer pasture lands, forest owners are obliged to consult with the Sami communities regarding forestry measures, whereas in the winter pasture lands this is voluntary.

The Sami communities also have the right to consultation regarding other operations that impact reindeer herding such as wind power, mines and infrastructure projects.

How does forestry impact reindeer herding?

During the summer, reindeer graze on moss and plants, often in the mountain districts where no forestry operations are pursued. During the winter, the reindeer live on ground moss and tree moss. The reindeer scrape out ground moss from under the snow, but under severe winter conditions they depend on tree moss.

Forestry impacts the occurrence of both ground and tree moss. When trees are harvested, tree moss disappears as well, only returning when the new stock has matured. Site preparation — which tears up moss to a greater or lesser extent, depending on the method — most often follows harvesting. When a harvested area is planted, the young stands are often so compact that the ground mosses are pushed back. They spread out again after the stock undergoes cleaning and pre-commercial thinning. Fertilization makes the ground more hospitable to grass and plants, which spread out at the expense of the mosses.

Forestry also impacts the mobility of both reindeer and herders. Dense young forest can make it difficult for reindeer herders on snowmobiles to drive their herds in one direction and can require them to resort to the more expensive method of herding by helicopter. An improperly laid forest road can tempt the reindeer into going in an inconvenient direction. In winter, ploughing of roads can be a measure that impacts reindeer herding. The reindeer choose to follow the ploughed road and can end up in unsuitable situations.

Finally, forestry can impact relics of Sami history such as old camping or cult sites.

What impact do various forestry methods have?

Other problems for reindeer herding

Reindeer herding is also impacted by land use other than forestry. For exampel:
The water power expansions from the 1950s and 1960s have radically changed access to land and the migratory paths for many Sami communities. Regulation of the water supply can also make it difficult to drive the reindeer along the rivers between winter and summer pastures.

All types of road construction and other infrastructure can impact reindeer movement patterns, both during and after the construction period.

Growing numbers of predators are a major problem for reindeer husbandry. Bears, lynx, wolverines, golden eagles and above all wolves can all hunt down reindeer or calves, and can cause even more extensive damage by splitting herds.

One result of climate change is that the tree line is moving upwards into the mountains. Periods of extreme weather are becoming more common — for example, winter thaws that lead to the formation of ice crusts that make it impossible for the reindeer to get at ground moss.

According to the principles and criteria of the Forest Stewardship Council® (FSC), consideration of the rights of indigenous peoples is a tremendously important part of conducting responsible forestry. Since SCA’s forestry is certified according to FSC we take a greater responsibility than that the Reindeer Husbandry Act specify.

The planning process often takes place during winter, where we and the Sami representatives discuss what kind of measure we can do to facilitate their business. If both parts are unsure what it looks like in a special place, we arrange for a field visit and together we visit the place.

The considerations that could result from these consultations include:

Where mistakes have been made, SCA has sought to make things right, for example, by pulling up contorta seedlings on land where they disrupted reindeer herding. Thinning has been planned and brought forward so as to facilitate reindeer herding.

Some of the things valued most highly by the Sami communities in contact with SCA is having a contact person with good local knowledge, who knows and understands the needs of reindeer herding and has a mandate to take decisions.