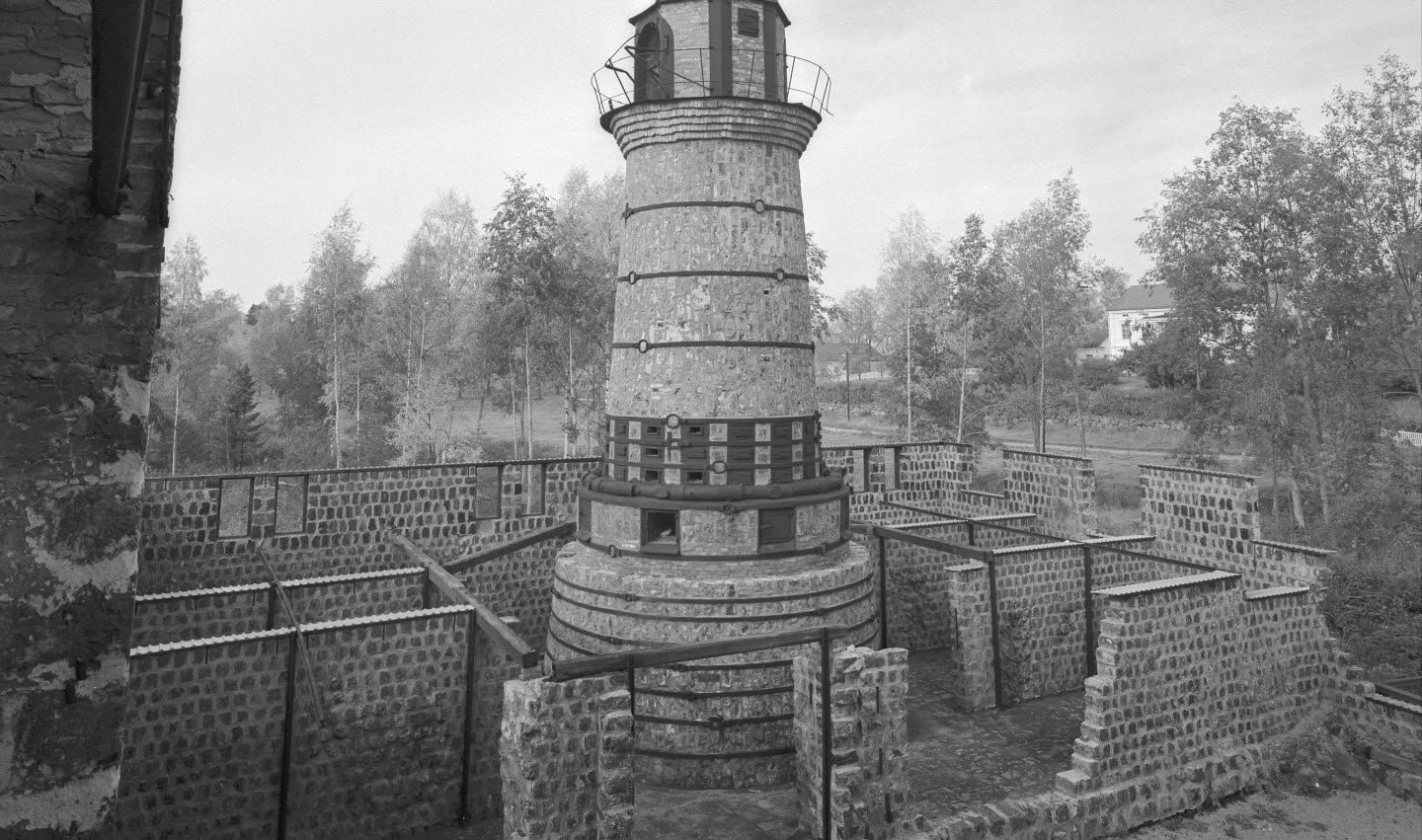 Iron smelting is a complex process. The goal of an ironworks has always been to improve the production process and to use less coal. Originally, charcoal produced in the forests around the works was used. Charcoal was later replaced by coal. To reduce CO₂ emissions from the process, hydrogen is today being tested as an alternative to coal.

Listen
The ore used in Galtström was mainly delivered from mines in central Sweden. The initial idea was to use iron ore from local mines, but the quality of the local ore was too poor. The ore from Alnö outside Sundsvall contained too much phosphorous, for example, which produced poor quality iron. At one stage, Galtström actually lost its iron mark, a pig’s head, because the quality of its iron was too poor. The new mark was a combination of the letters G and B (Galtströms Bruk – the Galtström Ironworks).

The iron ore delivered to Galtström was placed in large pockets by the furnace. There are still old cast iron signs with the names of the mines, including Stripa, Grängesberg and Utö.

Ore-dressing
The process began by breaking the ore into pieces about the size of a man’s fist, which was back-breaking work. Then it was dressed in the furnace to burn off water and other impurities like sulphur and carbonic acid. Dressing involved heating the iron ore to dry it, but not smelting it.

After the ore-dressing came the crushing process. In the crushing process, the ore was broken down even further into walnut-sized pieces using a trip hammer. The trip hammer was driven by a water wheel. Later on, a steam-driven crusher was used. The furnace standing today was built in 1890 and fueled with blast furnace gas.

The blast furnace
After the crushing process, the iron ore was ready for the blast furnace. The 16-meter high blast furnace stack was loaded from the top with alternating layers of iron ore and coal. The furnace master was in charge of operating the furnace and making sure the raw materials were added correctly. Iron ore from different mines was mixed to achieve the desired quality of iron. Quartz or limestone were also added to bind and separate the impurities. The impurities in the iron ore formed a slag on top of the iron and could be removed. To raise the temperature in the blast furnace, preheated air was blown into the bottom using a hot blast, which was originally driven by water power but later by a steam machine. In full operation, the temperature at the bottom of the furnace could reach 1,300 °C. The slag floated on top of the iron and after a few hours, the molten iron flowed out through a tap hole at the bottom of the furnace. The slag flowed out through a tap hole higher up. The iron cooled and hardened into ingots – pig iron. Some of the slag was cast in molds – clinker blocks – which were used as construction material. Clinker blocks come in a variety of beautiful colors. From shimmering blues and greens to darker grays and black. The colors of the slag are based on its chemical composition, including the mixture of metal oxides and the drying temperature and speed. The slag that wasn’t used for clinker blocks was thrown onto slag heaps or used for road construction. The current blast furnace was built in 1884. Blast furnaces operate on the principle of chemical reduction, whereby the oxygen in the iron ore is separated from the iron and combines with the charcoal to form carbon monoxide and carbon dioxide. When combined with nitrogen, these gases formed the combustible blast furnace gas, which could be recovered and used to fuel the steam machine and furnace, and to heat the air blast.

Further processing of iron
The pig iron produced in the blast furnace could be used for casting but not for forging. Some of the pig iron was sold, some was used in the ironworks’ foundry and some was worked into malleable rod iron. Everything from ship propellers to frying pans was made in the foundry.
To use the iron for forging, the carbon content had to be reduced from 4% to less than 1%. The iron was smelted in a special furnace, the fining hearth, in which more carbon was burnt out by reheating with a water-powered trip hammer. The iron was divided into pieces that were forged into long bars – rod iron. The iron was sold in these bars. Some of the rod iron was used in the works’ forge where it was used to make nails, hinges, axes and horseshoes, mainly for the ironworks’ own needs. There have been two wrought iron hammers at the Galtström Ironworks with accompanying fining hearths. The lower was located at the blast furnace and the upper at Hammardammen.