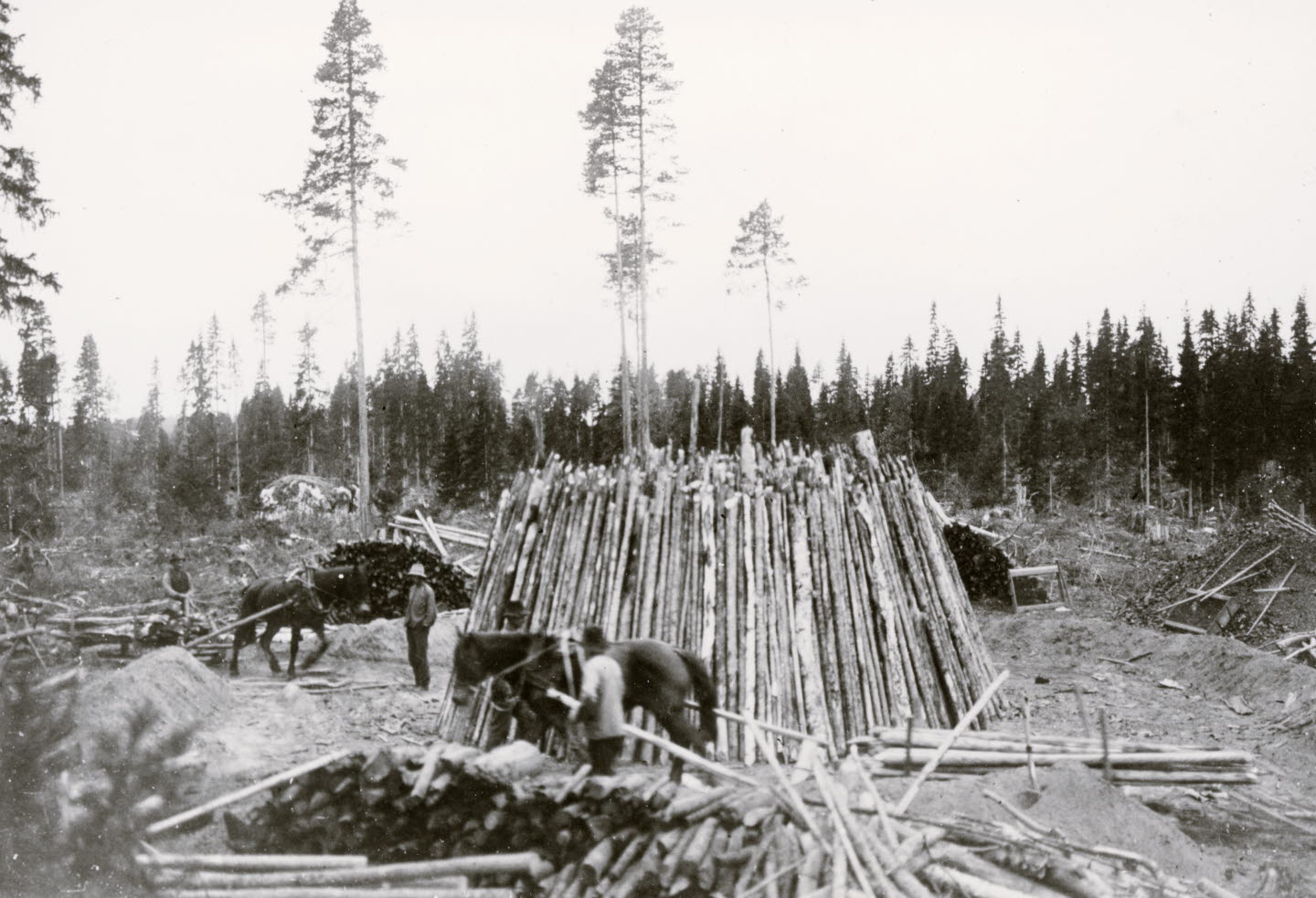 The abundance of fuelwood for charcoal production was the main reason why ironworks were established in northern Sweden at the end of the 17th century. In central Sweden, where the iron ore was found, the land had been deforested over the years due to mining and iron smelting. Some works had been forced to close due to a lack of fuelwood.

Charcoal was important for iron smelting. Using charcoal for combustion caused the oxygen binding the iron in the ore to evaporate. By the mid-19th century, 30 m³ (approx. 5 tonnes) of charcoal were used per tonne of iron smelted.

The charcoal was made in charcoal stacks. The fuelwood was taken from the works’ own forests or purchased from local farmers. Charcoal production made a valuable contribution to their livelihoods.

A charcoal stack was built by cutting the fuelwood into equal lengths, which were then stacked to form the typical mound shape of the charcoal stack. When the stack was formed it was covered with branches. The branches were then covered with earth and fines (finely crushed charcoal mixed with sand and clay). To stop the stack from collapsing, it was reinforced with pockets of transverse slats. The wood inside the stack was ignited through a hole at the top and the air flow was regulated through a grate at the bottom. During the process, the first three days were considered most critical. The stack could go up in flames, causing gas explosions inside the stack that could form large holes. To avoid destroying the stack, earth had to be thrown into the holes to reseal them. The draught into the stack had to be regulated to control the carbonization process. If too much oxygen came in, the stack could ignite. The charcoal burner had to stay alert day and night.

If everything went well, the carbonization process took three weeks and all of the fuelwood was now charcoal. Water was poured on the kiln when dismantling it to prevent the charcoal from burning up. The charcoal was transported to the works during the winter in horse-drawn wagons, where it was stored in large charcoal magazines adjacent to the ironworks.

There are many charcoal pits in the forests around Galtström, which are the remains of the charcoal stacks. A remnant of a charcoal stack is is usually a circular area surrounded by a low earth wall. It will often by covered by densely packed small spruce trees, with charcoal remains in the soil.