Buying an old wooden house in Östersund ignited a new passion for Petra Nyborg. A passion that now inspires others with an interest in recycling and interior design. Among other things, Petra and her partner Erik Vikström reused heartwood pine decking from SCA to build garden furniture that was auctioned to raise funds for the Swedish Childhood Cancer Fund.

PETRA NYBORG was tired of rented accommodation and was longing for something of her own; however, the high prices in Östersund made it difficult to find a suitable property within a reasonable distance from the city. This led her to a viewing of a neglected old timber house that lacked heating but was located only 10 kilometres outside Östersund.

“I had the feeling that this was somewhere I could live,” says Petra.

The house purchase proved to be the start of a new interest that became a lifestyle. Five years have now passed and Petra’s skills have literally emerged.

“You don’t need to know or be able to do everything to give it a try. Young women especially tend to say to me that they can’t do something but then I ask if they have even tried,” says Petra, who has become a source of inspiration when it comes to renovating old buildings, recycling and interior design.

Petra shares her experiences on Instagram and other channels, as well as accepting tips from others who share her passion.

FROM USED UP TO REUSED

Techniques, colours and materials have all been explored and tested along the way; according to Petra, only the imagination limits the uses that old things can be put to.

“Many times there is a house within a house waiting to emerge. All you need is time, love, sandpaper and paint. With this house, I followed Pippi Longstocking’s example and thought ‘how hard can it be?’”

To restore, reuse and painstakingly reveal the original walls and doors, find old furniture and knick-knacks at flea markets and auctions is a creative process.

“Buying that dilapidated old house was one of the best decisions I ever made. It was there that I learned to sand floors, plaster and wallpaper with fantastic results.”

However, just as the house was beginning to take the form Petra wanted, she met Erik. The distance between their homes seemed too great and Erik’s house was far too new and modern for Petra, so they decided to look for a home they could share. They moved into their current house, which dates from 1914, in December 2018 and together they set about carefully restoring it.

"Erik didn’t have a great deal of experience of renovation and building, but my passion proved to be contagious. He has also turned out to be good at the things that I am somewhat lacking in. He is more adept at carpentry while I am the visionary who likes to tear things down to find out what’s behind the wallpaper and walls. We complement one another and it is great fun to do this together,” says Petra.

Recycling has an vital environmental aspect that is important to Petra. If cared for, wood can last for a long time and have many lives.

“I have a passion for wood because it is a living material that can be reused many times, recycled and then disposed of without creating waste. This is particularly true of heartwood pine,” says Petra.

Heartwood pine comes from the innermostpart of the trunk of 80 to 100-year-old oldgrowth pines. The decking used on SCA’s stand at the Biathlon World Cup in Östersund in March 2019 was given new life with Petra and Erik, who jointly designed and built garden furniture and a veranda.

“The first time I walked on the veranda decking it felt just as smooth as I had anticipated – it was a special feeling. Then it becomes so beautiful after a few years when it greys,” says Petra.

Heartwood pine is rich in nature’s own impregnation substances and is naturally resistant to rot, fungus and pests. It is slightly curved so that water runs off without damaging the wood, which benefits from being left to dry for a while before use.

“It is ideally suited to garden furniture and decking such as ours. There is no need to treat it with anything although we do wash it with soap and, of course, the soap is natural just like the decking itself.

AUCTION ON BEHALF OF THE SWEDISH CHILDHOOD CANCER FUND

In collaboration with SCA, a table and one of the benches were auctioned on behalf of the Swedish Childhood Cancer Fund.

“We have a nephew who has been through cancer, so this cause seemed particularly important. The bidding ended at SEK 5,095 and with SCA’s additional contribution a total of SEK 10,295 was donated to the Swedish Childhood Cancer Fund,” says Petra.

The remaining planks of heartwood pine decking from the Biathlon World Cup may eventually be given new life as herringbone-patterned tables, but many people have been in touch about the bench in particular.

“The bench was a real success but I don’t know if or when we will find time to make more. We work many early mornings and late nights but we are passionate about creating something new from the old. All the positive feedback or tips we receive certainly motivates us to continue,” concludes Petra. 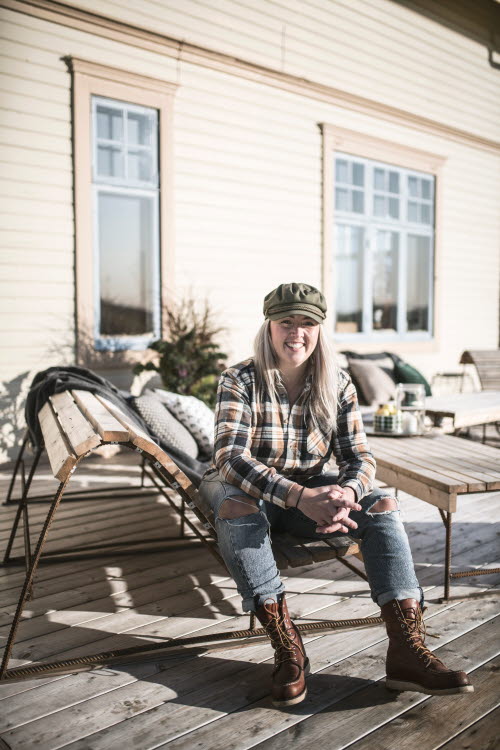