I want to build more in wood!

The Wingårdhs architectural practice has created many of Scandinavia’s most expressive buildings. Its founder, Gert Wingårdh, is motivated by designing buildings that touch people’s lives, something that he has consistently succeeded in over the past 40 years. The practice is now putting a pioneering foot forward in contributing to sustainable construction without compromising on artistic ambition. “We propose wood as the first choice in all of our projects. This is the very best way for us to actively influence carbon dioxide emissions,” explains Gert Wingårdh.

THE JANUARY SKY IS AFLAME in red as Friday dawns over Gothenburg. At Kungsgatan 10A, the floors occupied by the head office of the Wingårdhs architectural practice begin to fill with staff. With its verdant street-level reception, the office opens its arms to visitors and passers-by alike. Although Wingårdhs has occupied the same address since the 1980s, the glass-fronted former retail premises facing the street is a new addition that illustrates the practice’s ambition to become more public – both in outlook and insight.

Architects and engineers enter, exchange greetings and make a brief stop in the stripped-down kitchen, before disappearing up into the building heading for their desks, coffee mugs in hand. Gert Wingårdh himself has an intensive morning ahead; a working day that should have been spent here in his hometown must now find time for a trip to Oslo. As the sole owner of this architectural practice of 220 employees, he is engaged and involved in many projects that demand his personal presence at crucial junctures.

Many Swedes have long recognised him as one of the country’s foremost architects and, through his involvement in the television programme Husdrömmar (Dream Houses) he has also become something of a national treasure. He began his own practice in 1977 at the age of 26 and still goes to work everyday with a spring in his step. When others unwind, he goes up a gear.

“I went through a period after I reached 50 when I felt a great need for recovery; however, after 60 I work myself into shape,” he affirms.

SHOWING THE WAY WITH WOOD

When visiting Wingårdhs it is readily apparent that wood is a hot topic. SCA Wood Magazine receives a warm welcomeduring a tour of the office, especially when our business and the theme of the article become known. “How appropriate! We do everything in wood these days,” says one architect with a grin. Wingårdhs has explored the positive impact of managed forests on greenhouse gas emissions in considerable depth. Their conclusion is that the practice’s greatest opportunity for contributing to increased sustainability is to consistently propose a building material that is renewable and that binds carbon dioxide throughout its lifetime.

“I want to build more in wood!” says Gert Wingårdh, “and there is no better way for us to actively influence carbon dioxide emissions than to propose wood as the first choice for all of our projects. Naturally, we are no strangers to other materials but these days we begin with timber as the framing material unless the customer specifically requests something else.”

This decision reinforces the impression of a pioneering company that has the courage to take the lead. Experience has shown that those who have acquired this knowledge can bring benefits to everyone involved. Gert Wingårdh draws a parallel with the issue of the accessibility adaption of buildings that took off around 20 years ago, when architectural practices were criticised for failing to take the issue sufficiently seriously in implementing their projects.

“We took that criticism on board, did our research and learned a great deal above and beyond the statutory requirements, which in turn meant that we could actively question our clients. It became apparent that by having superior knowledge we could also often get our own way,” he explains. Something similar is happening now in terms of wood as a building material.

“Now as then, it is probably primarily perceived as an exchange of knowledge between us and the client; of course, there are projects where wood is not appropriate but in most of our housing and office projects it actually is. In Wingårdh’s assessment, the practice is in a position to reduce carbon dioxide emissions by 50% through the considered use of wood instead of materials such as steel and concrete in their buildings. The company has recruited wooden building specialist Dan Wilhelmsson specifically to participate in the early stages of projects together with the
architect and client. His expertise is also useful in addressing other wood-related issues covering everything from fire safety and acoustics to construction techniques.

One of the public wooden building projects currently being planned in the office is the extension to Gothenburg’s Universeum science centre. The existing building, which has been described as “an enormous, modern wooden box”, was completed in 2001 and is one of Gert Wingårdh’s personal favourites.

“There are many reasons for that; in part, the raw aesthetic is close to my heart than many other expressions that we work with and partly because the building grew from a really enjoyable process in which we collaborated with public authorities, the business sector, the University of Gothenburg, Chalmers University of Technology and the West Sweden Chamber of Commerce,” he explains.

That the exuberant atmosphere of Universeum succeeds in making young people aware of science also contributes to its status as a favourite project.

“Not only that, but half a million people pass through the building every year, something that few of our other buildings can match,” says Gert Wingårdh.

Universeum was already on the drawing board in 1998. The dynamic organisation demanded a flexible building, making wood the obvious choice of material. For the new extension, Wingårdhs has created a striking wooden dome with a diameter of 26.4 metres. The building will use digital technology to visualise science and illustrate complex events in the world’s first visualisation laboratory. At the same time, Universeum will receive an elevated profile.

“The most exciting thing will be to see how the sphere itself, the visualisation dome, is formed of polyhedrons. Universeum is the perfect arena for exploring new solutions,” says Gert Wingårdh.

The building will be clad in cedar chipboard, manufactured from waste from sawing cedar logs. The chipboard panels are delicate to the touch yet extremely durable, a necessity in the heavy urban traffic and periodic extreme weather conditions affecting the coastal city. The naturally greying colour shifts that occur over time will provide the facade with a varied, vibrant surface.

Universeum was a pioneering project in terms of the kind of sustainable building that has gone from exception to rule over recent decades. This development has been rapid without being hurried. Gert Wingårdh recalls the Bo01 Malmö housing exposition of 2001 as being the starting pistol for a considerably more energy efficient building industry. This was when new requirements were set for a maximum energy consumption of 110 KWh per square metre and year. At that time, the majority of production was at around 200 KWh a year while today it has come down to 75, with 50 KWh per square metre being technically feasible.

“This is a quarter of the original consumption, which I would call excellent progress! Unlike many others, I think that the architectural industry has been remarkably quick to adapt. The level of acceptance is 100% and talking about energyefficient housing today is like preaching to the choir. It goes without saying,” says Gert Wingårdh.

A MATERIAL CHOICE THAT LIFTS A PROJECT

Gert Wingårdh has been highly aware of sustainable building for a great many years now; as early as 1988 he was awarded Sweden’s most prestigious architectural prize, the Kasper Salin Prize, for Öijared Country Club, a project in which wood, strong climate awareness, local materials and low energy consumption played a crucial role. In addition to wood’s climate-friendly attributes, Gert feels that one of its appealing aspects is the uncomplicated relationship so many people have with the material. Its decorative characteristics are deeply rooted and much loved.

“As a material, wood has always been used for interiors as it provides a warmth and colour scale that is much appreciated in Scandinavia. Whitewashing also achieves the bright, fresh feeling that has long been in demand. More public buildings should be built of wood,” believes Gert Wingårdh, who also sees great possibilities for other public structures.

“We are looking at projects with wooden road bridges and parking garages. These are not a reality as yet but they certainly will be within the near future. We see no limitations to what wood can achieve.” 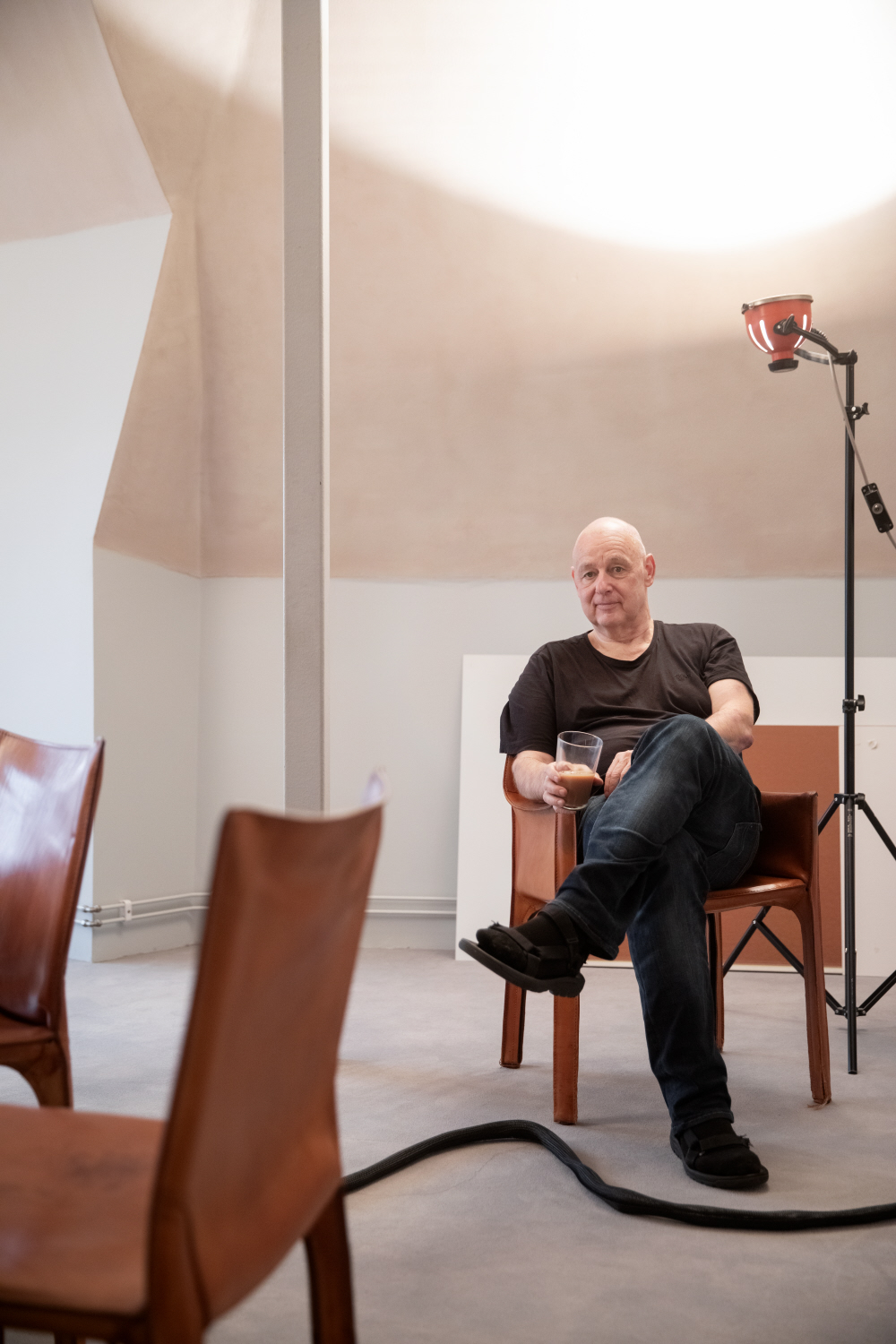