When SCA arranged a reference group meeting in Njurundakusten Conservation Park, it was very well attended. This popular area engages a lot of people, and Emelie Westin, SCA’s park manager,

Despite the somewhat harsh winter weather, a large group of people attended the reference group meeting that SCA held this time in Njurundakusten Conservation Park. The park area stretches along Medelpad’s southern coastline down to the border with Hälsingeland and features popular destinations such as Löran and Galtström. The park also connects with two marine nature reserves.

The participants included representatives from the Municipality of Sundsvall, the Swedish Forest Agency, the Sundsvall-Ånge branch of the Swedish Society for Nature Conservation, the Botanical Society of Medelpad and Mid Sweden University, as well as several people associated with the Galtström Ironworks.

“It was really great to see so many participants. We want to attract a broad group of stakeholders who can give us ideas for the park’s continued development. Ranging from the conservation of forests, aquatic environments and grasslands, to measures for strengthening the experience values linked to outdoor recreation and cultural remains,” says Emelie Westin, nature conservation expert at SCA and responsible for the Njurundakusten Conservation Park.

The focus of this year’s meeting was to discuss the various measures that SCA has completed in the park in recent years. Although most of the park’s forests are relatively young, they are rich in high conservation value. There are, for example, beautiful rocky pine forests, a number of alkaline fens, sand fields and shore meadows, as well as aquatic biodiversity value in the form of shallow seabeds and lagoons.

“We started by looking at pine forests along the road to Lörudden, where SCA has created several areas with bark-stripped pine trees. By stripping, or damaging, some of the tree bark, we are accelerating the tree’s aging process and mimicking the effects of forest fires, which used to be far more frequent than they are today. We are doing this to create a special type of wood that is rare in modern forests and cannot be generated naturally without a burn. The wood is important because it provides habitats for many animals and plants,” says Emelie. 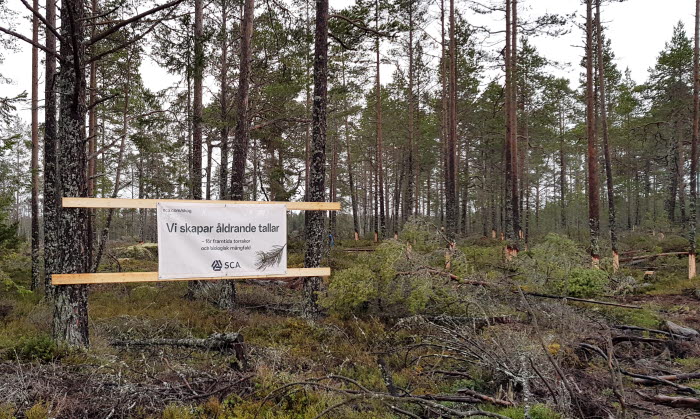 In one area, Mattias Edman, a researcher at Mid Sweden University, is conducting an extensive veteranization study, where he compares various methods for speeding up the aging process of pine trees. There are six sample plots in the park, and the group visited one of them.

“This is an exciting project and we think it’s great that SCA can be involved and contribute to the research. One of the specific aims of our conservation parks is to encourage various studies and test new methods,” says Emelie.

The group also looked at an area close to the sea along Löruddenvägen, where it was agreed that most of the spruce should be removed and that active conservation measures should be taken to preserve the pine forest. A prescribed burn and more bark stripping could be needed here.

“We also visited an alder marsh, where we agreed that SCA should perform a selective thinning operation, which means removing certain trees to give individual alder and old pine trees more space.”

The group also visited Långören, south of Galtström, where SCA and BirdLife Medelpad have made a birdwatching loop with signs that provide information about various birds.

“It’s fantastic that so many visitors have found the birdwatching loop. Since the area is on the border of the Långören marine nature reserve, the county administrative board has improved the parking lot as well as the track to the rest area by the sea. They are also going to make a wind shelter and provide toilet facilities,” says Emelie.

During the winter, Emelie will create a management plan for the park.

“My hope is that members of the reference group will provide tips and suggestions for how we can continue to develop the park moving forward. Their views are important for our future management,” says Emelie.