Focus on woodpeckers and wetlands at Sörgraninge meeting

The restoration of wetlands and the white-backed woodpecker were a few of the topics discussed at this year’s reference group meeting in Sörgraninge conservation park. “It is invaluable to receive many opinions from different stakeholders,” says Mikael Berg, park manager.

The meeting, in late October, began at the Sakrisberget mountain, with representatives from the Västernorrland County Administrative Board, Sollefteå Municipality, Ångermanland’s ornithological society and SCA together with two contractors.

“It was fun to meet up with everyone again,” says Mikael Berg, conservation specialist at SCA and the person responsible for Sörgraninge. “I was particularly pleased that we also had representatives from the municipality this year.”

Since the meeting in the autumn of 2020, Sörgraninge has grown by 670 hectares.

“The park is now 3,147 hectares and it is gratifying that we have incorporated Hornsjömon and Hornsjöbäcken valley, says Mikael.

Over the past year, SCA has carried out a number of measures in Sörgraninge.

“These include a prescribed fire of 12.5 hectares, meadow mowing and measures to control lupins, as well as the installation of three Ural owl nesting boxes. For the fourth consecutive year, we have also conducted an inventory of soil fungi in Pimptjärnsmon, with the discovery for the first time of the rare Tricholoma roseoacerbum. It is great to see that we find new fungi with every inventory,” says Mikael.

Another new measure is SCA’s wetlands restoration in the Småmyrarna area near Klingertjärnen, in a joint project with Sollefteå Municipality. The group visited the marsh where Mikael, together with the contractors Andreas Fahlén and Tomas Rydkvist, demonstrated how this work is progressing.

“About 45 hectares of wetland is to be restored, and we will excavate and build dams in a number of ditches from the 1950s and 1960s. We are planning to backfill at least 4,000 meters of ditches, but it will probably be even more than that. This will help to raise the water level in the marsh, which will benefit biodiversity and water quality as the marsh regains its ability to purify water,” Mikael explains. “We will also clear more trees, as a marsh with open space is more attractive to birds.”

“One of SCA’s sustainability targets is to work more with restoring wetlands,” commented Anna Cabrajic, a forest ecologist at SCA.

Back at Sakrisberget, participants walked along the new children’s trail, where signs with SCA’s cartoon characters Kolle and Mila explain about the forest. The group expressed high praise for the trail, and suggested ways it could be developed. 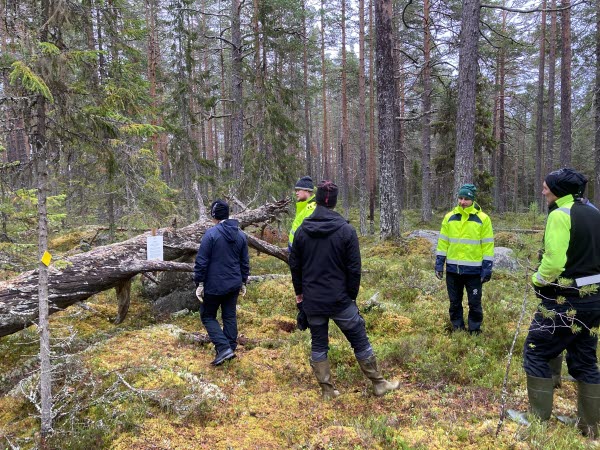 After lunch, the tour moved on to a deciduous area near Graninge Lake where the ornithologists Tomas Birkö and Lasse Bengtsson talked about the importance of deciduous forest for the white-backed woodpecker and other species.

“It was particularly interesting to hear that there has been an increase in observations of white-backed woodpeckers in Norrland compared with southern Sweden, where strenuous efforts have been made in biotope care and the release of woodpeckers. It is exciting that Tomas and Lasse can see significant potential for white-backed woodpeckers here in the north,” says Mikael and adds:

“To encourage white-backed woodpeckers, the tips we received were to promote large areas of birch forest, and sallow and alder – preferably near water, and to make sure we remove spruce trees. But this type of woodpecker is very particular about its habitat so we must understand that it may take many years to create the right environment.”

The group visited a meadow adjacent to the deciduous forest. SCA began mowing the meadow last summer to encourage butterflies and pollinating insects.

“This meadow lay untouched for more than 20 years and large parts are overrun with wild raspberries, rose bay and lupins. We decided to continue mowing it and that even burning should work, but also that it would take time before meadow flowers begin to appear. Some small spruce trees should also be removed,” said Mikael.

SCA’s nature conservation expert Håkan Blomqvist also explained how they work with measures to encourage insects in the butterfly park near Bräcke.

The day ended at the Bastusjön Lake, where SCA has built a jetty and wooden picnic table for visitors. Here, Mikael has carried out measures to encourage sand-loving insects. 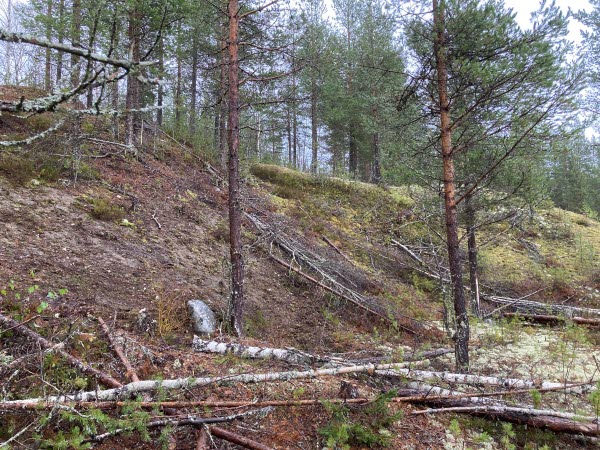 “Following a suggestion by John Granbo from the county administrative board last year, I started to rake away organic debris from the sand embankments near the lake. When the sand is exposed it becomes easier for mining bees and Aculeata to find the right habitat,” says Mikael.

Mikael is satisfied with this year’s reference meeting.
“It is always invaluable to meet up and hold discussions. This provides us with many good ideas about how we can develop the park.”