At the end of October, the reference group held another meeting about SCA’s Sörgraninge conservation park in Ångermanland. Single-tree selection, new red-listed species and future visitors were a few of the items discussed during the day. 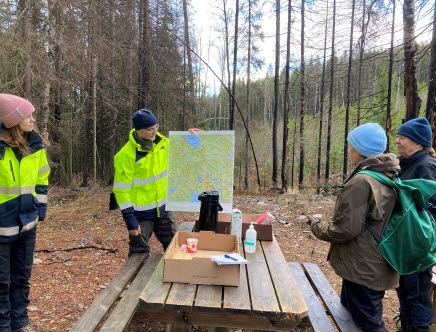 This year’s reference group meeting began at the outlet of the Långsjön Lake, and Mikael Berg, nature conservation expert and the person responsible for the park, welcomed all of the stakeholders involved in the park. The participants were from SCA, the county administrative board, the Swedish Forest Agency, Ångermanland’s ornithological society and Graninge folklore society.

“SCA really appreciates the valuable feedback received on the measures we have taken in the park and the opportunity to discuss different possibilities. The reference meetings offer us a broad knowledge base and a variety of perspectives, depending on the interests represented. This is very positive in our view,” says Mikael.

Mikael starts the meeting by outlining the measures conducted in 2020.

“We have expanded the park to form a larger conjoined area that is now better linked to the three surrounding nature reserves. We also carried out controlled burning of six hectares, created dead pine wood for insects and thinned 11 hectares to promote deciduous trees.”

The group then visited an area at the foot of the Björnberget mountain. SCA is planning continuous cover forestry measures with single-tree selection in an area of 12 hectares, and the group held a lively discussion on the various advantages and disadvantages.

Single-tree selection involves harvesting trees with the aim that the forest remains fully layered after harvesting, meaning it retains trees of all different size classes, from small seedlings to large trees, in all parts of the forest, and that the small trees always outnumber the large trees.

Finally, the group agreed that single-tree selection is a useful method for the area, but that it must be carefully planned and carried out using the right machines and operators with experience of single-tree selection. Parts of the area were also heavily drained in the 1960s, and the group was divided on whether or not the ditches should be refilled. However, everyone agreed that the area’s natural water conditions should be restored. 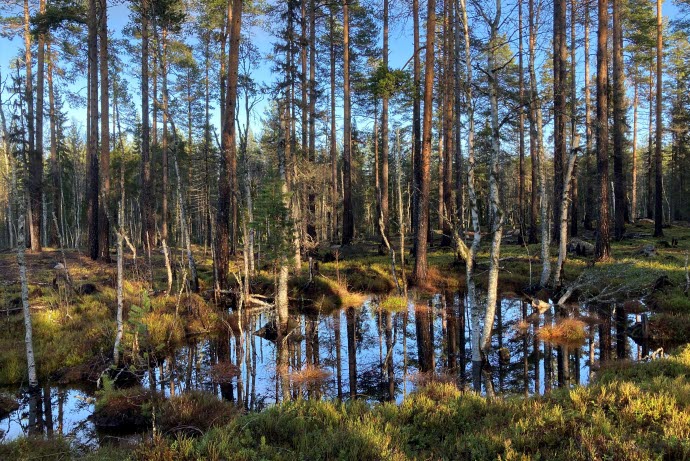 Following a vegan lunch near an area of controlled burning, with a view of Björnberget mountain, Mikael spoke about the red-listed species found during SCA’s inventories of the park.

“The insect inventory by Lars-Ove Vikars of the three burned areas found 23 red-listed insects, which is great news. We also found phellodon secretus and ramaria botrytis at the burned areas in Pimptjärnsmon and including these, we now have identified 20 different red-listed soil fungi over the past two years. The bird inventory at the Bjursjömyren marsh showed that both wood sandpipers and common snipes have found their way here after our wetlands restoration in 2018.” 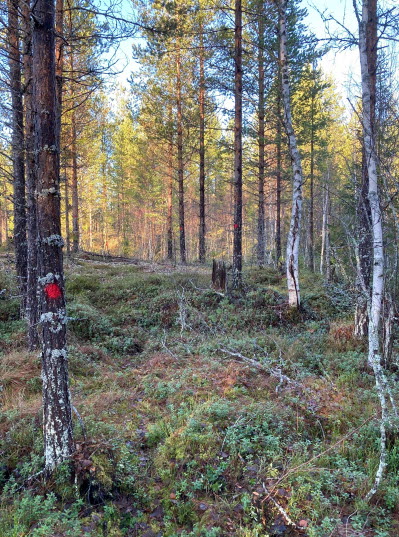 A number of fine trails are available in the Sörgraninge conservation park and the group walked along part of a completely new trail.

“The new trail is 4.4 km and passes through areas that were controlled burned in 2014 and 2018. The trail also passes through a large marsh area called Småmyrarna, which SCA is planning to restore,” says Mikael.

The group then visited an area that SCA has cleared to favor the management of deciduous trees. The group also discussed measures planned for 2021.

“The county administrative board suggested measures for insects that live in the former sand quarries by the Bastusjön Lake, which is a simple measure and yields good results. Furthermore, we are to cooperate with the county administrative board, which is planning to conduct electrofishing along the streams and in ponds in the area. We will also add dead wood to the Långsjöbäcken stream and conduct new controlled burning,” says Mikael.

A recurring discussion during the day was how we can attract more visitors to the park.

“Some people perhaps think it is a little remote, but there is plenty to discover for anyone interested,” was one of the comments from the group.

A new park brochure is to be published and there are plans to create a children’s trail. Moreover, Mikael Berg hopes to collaborate with the Swedish Outdoor Association (Friluftsfrämjandet).

“Perhaps we could work together to hold outdoor days with themes in the conservation park. And then there is Bastusjön, which is now part of the park and is an interesting lake for canoeing and fishing. I hope more people will discover this area in the future,” concludes Mikael.