SCA has carried out excavation work on the Toskbäcken stream in Lycksele to open up a blocked section of the watercourse. The restoration of the stream’s natural route will benefit biological life and create habitats for different species.

Toskbäcken in Västerbotten is approximately 20 km long and about half of the stream has been cleared as a route for timber floating. The stream flows into the Ume River and sections of stream, and large areas of land around the stream, belong to SCA. Ulf Hallin, SCA’s nature conservation expert in Västerbotten, discovered that the stream had been substantially straightened in one place. Moreover, the inlet to a small pond adjacent to the stream was blocked and the water bypassed the pond through a channel.

“A straight watercourse is more one-sided and offers fewer habitats than a natural watercourse, and this impacts the diversity of species that can live in the water and on the surrounding land,” says Ulf.

Diverting the water back

SCA applied for permission to open up and divert the water back to the original stream bed, which will improve the biological life in the watercourse and pond in the long term. The action taken by SCA concerns about 400 meters of the original stream. Using excavators, a 15-meter ditch has been dug to open up the stream bed and to divert the water. The old ditch was then blocked.

“We carried out the work in early winter as this allowed us to build a temporary winter road across the wetland and avoid driving damage caused by the excavator. 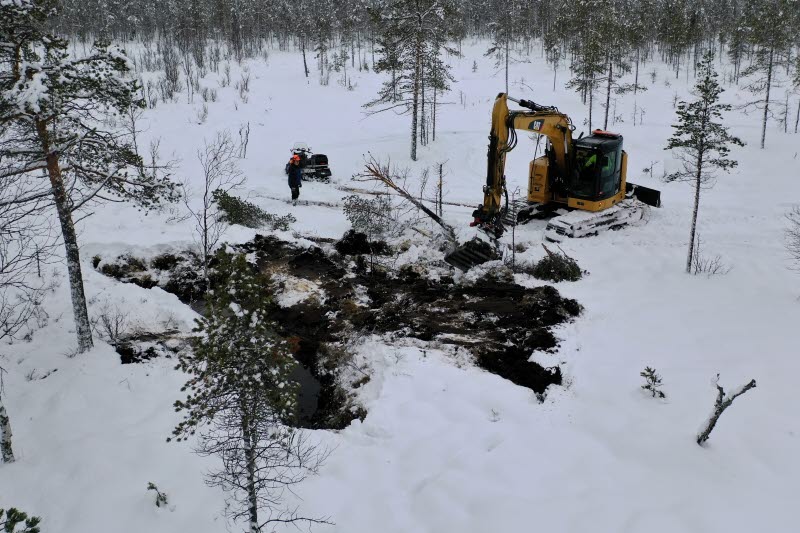 Opening up the stream bed will benefit life in and around the stream. Previously, SCA also replaced a culvert that acted as a migration barrier in the stream, which also improved the river ecosystem.

“The restoration of a watercourse such as this stream improves the entire ecosystem in and around the watercourse,” says Ulf. “It produces a more varied watercourse with greater variation in habitat for different species, including invertebrates (insects) that benefit from flowing water in a meandering stream compared with a channel. And more insects means more food for trout, grayling and other fish. A natural watercourse is also better at maintaining stable water levels as the water is flowing more slowly.”