Fly ash from SCA’s industries can be used to build high-quality forest roads, as shown in a study carried out by SCA and Skogforsk (Forestry Research Institute of Sweden). “Sustainability runs through everything we do, and being able to re-use fly ash for our roads is another step towards integrating the forest with industry,” says Tomas Johansson of SCA Skog.

Every year, SCA builds approximately 1,000 kilometers of forest roads. At the same time, SCA’s industries produce thousands of tonnes of fly ash in conjunction with their use of forest raw materials such as branches and crowns for energy.

“Using the fly ash where it does the greatest good is important. We know that it works extremely well for soil stabilization, since we’ve tried it at both Östrand and Tunadal,” says Tomas, and continues:

“Isolated experiments in using fly ash for forest roads have also been carried out, with positive results. But we felt we wanted to get more facts and really find out how production involving the use of fly ash in road-building could work. Which method is best, how should the fly ash be handled, what does it cost and what would the road quality be?”

Skogforsk was commissioned by SCA to conduct a detailed study. Last summer, two test roads were built in Medelpad to test different methods of using the fly ash.

“We mixed fly ash with gravel in various ways using different types of machines, and then built sections of road with the mixes. In addition, we built a normal road for reference,” says Mikael Bergqvist from Skogsforsk.

Skogforsk conducted ongoing measurements of the bearing capacity and quality of the roads. They also conducted a time study to identify which method was most efficient, and performed a cost calculation.

“It’s a question of finding the optimal method for bringing the fly ash out into the forest, mixing it with gravel, laying it on the road, watering the road, and planing and packing it to create a strong road,” Tomas explains.

At the end of May this year, it was time for Skogsforsk and SCA to present the results, which is why they arranged an excursion for other forest companies, the Swedish Transport Administration and others with an interest in forest roads.

“There was a great deal of interest, and we had a lot of participants, which was wonderful,” says Tomas. The results of our studies will be of help to others who are also building roads. I’m very satisfied with the study. Now we know a great deal more, and we can see that fly ash produces much harder roads than we previously thought.” 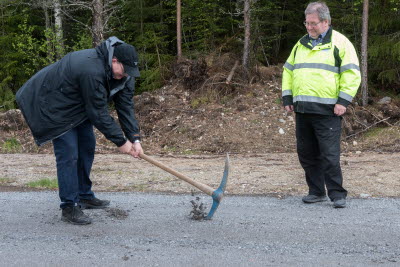 The study shows that compared with a normal forest road, fly ash generally often produces harder roads with excellent bearing quality. But obtaining the best fly ash mix and getting the water to run through the road so that the fly ash hardens is important. But handling it correctly is also important, since the fly ash creates a lot of dust. It must be stored dry and covered over so that it is not exposed to water before the road is built.

The study shows that getting the right mix of fly ash and gravel is important.
“It appears that a finished mix of ash and gravel laid out on the road is the best and most manageable method, and at the same time we ensure the high quality of the road.”

Since fly ash produces roads with good bearing quality, it is of greatest interest for roads that will be used year round, serving as main routes and exposed to heavy traffic.

“Every road project is unique, and it is important to consider all the aspects in building a road. For example, it’s more costly to build ash roads compared to normal forest roads, but since ash produces roads with better bearing quality, we could perhaps avoid a great deal of maintenance work that also costs a lot,” Tomas says.

Now SCA will conduct extra checks on the experimental roads to see how they change over time and how they are affected by factors such as weather and traffic.
“The roads withstood this year’s ground thaw very well, as well as the transportation that took place at the time. But it will be interesting to monitor them over a longer period,” says Tomas, and concludes:

“Now it is up to management at SCA to determine how we’ll move forward with this. More studies and experiments may be needed, or we’ll try using ash in more roads. We’ll see what the future brings.”