On May 22, SCA conducted controlled burning of a bog islet in Eastern Medelpad, Sweden. Burning is one of the most effective nature conservation measures available to benefit different species of animals and plants that are dependent on forest fires.

The burning took place on a bog islet of approximately 3 hectares south of Eksjön in Timrå Municipality. The islet lies between a bog and a lake and was ideally located to conduct a controlled burn. The burning was carried out by both SCA employees and contractors who were interested in learning more about controlled burning.

“Conditions were very good for burning as the forest on the islet was fairly open and dry, at least on the surface. The islet was predominately pine, though with a significant number of spruce on a slope down to the bog. Only ant hills and some old fatwood stumps continued to smoulder once the fire front had passed,” says Tomas Rydkvist, who is an expert on burning and former nature conservation expert at SCA.

A controlled burn benefits many species that are attracted by everything from the burning embers to wood that the fire has turned into charcoal. Some insects arrive when the area is still burning, while others thrive in the burned area at a later stage.

“During the first two years after burning, there are usually many woodpeckers in the area, as there is an abundance of insects to feed off,” says Tomas.  “Shortly after the fire, new life emerges in the burned earth, such as deciduous trees, rose bay and raspberries.”

Most spruce trees usually die in a controlled burn, while pine trees fare better due to their thick bark and high crowns.

“Damaged or dead pine trees are highly important for biodiversity as they provide habitats for many different species for a very long time,” says Tomas. “Pine trees offer benefits more hundreds of years, first as standing live trees, then as standing dead trees and finally as dead trees lying on the floor of the forest, known as fallen logs.”

All burning work is conducted under highly controlled forms using experienced and knowledgeable personnel. The most important thing is to create effective and clear boundaries for the area to be burned. And good weather conditions are essential, to achieve successful and safe burning. In fact, the aim is to start burning with a “closing window,” meaning you should try to start the fire in an area when the weather is about to get worse.

“And we knew rain and higher humidity were expected here after the fire,” explains Tomas and continues:

“The Biodiversity Day offered a whole range of different species and perfect weather conditions. In the morning, when we were setting up a pump, a raven appeared and was curious about who we were. They were probably nesting on one of the small islands in Eksjön. Curlews, wood sandpipers and common snipes sang across the bog and across the lake we heard the cry of a black-throated diver and the cawing of seagulls. When we had completed the burning, a holly blue butterfly flew along the edge of the bog.”

SCA performs many controlled burns during a year. According to the rules of the FSC®, we need to burn a minimum of 5% of the rejuvenation area in terms of dry, healthy land, during a five-year period. 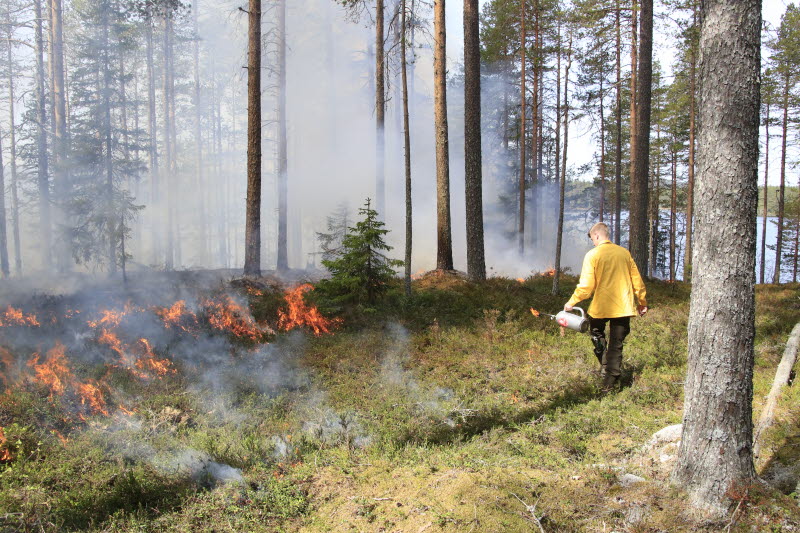