SCA’s positive trend with increasingly less damage to ancient and cultural remains has continued. The target is zero damage to remains during site preparation and final harvesting operations. “We are moving steadily towards our zero-damage target,” says Anna Cabrajic, forest ecologist at SCA.

In 2016, SCA launched an action plan with the goal that no known or registered archaeological or cultural remains would be damaged by forestry operations. The most serious damage is caused by driving over remains during soil scarification and final harvesting operations.

“It feels good. It is quite clear that by planning effectively, we are laying the groundwork for correct placement of the conservation stumps around cultural remains, and that is leading to less damage,” says Anna and continues:

“With a focus on zero damage, we have worked extensively with training and information transfers between planning, harvesting and soil scarification. We can see that the most severe damages have been reduces and that we also have fewer damages on the most sensitive part of the remains. 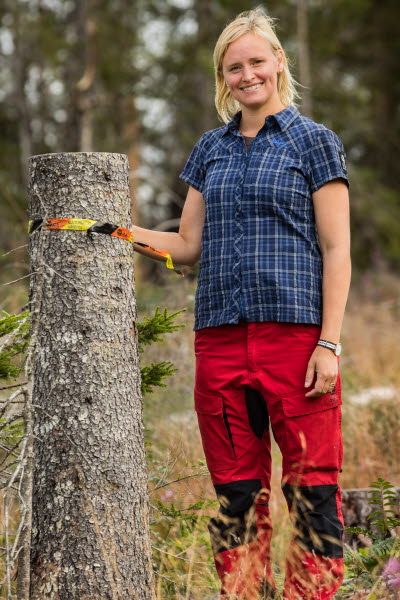 “We have created clear directives for how these conservation stumps should be positioned to show machine operators where remains are. In the event that our harvesting plans have been inadequate, and the stumps have not been positioned correctly, we have made new site preparation plans and placed extra ranging rods around the remains to make sure they are clearly marked. That has also had a positive effect on the results.” says Anna.

“I am delighted by the level and depth of commitment in our organization for these issues. We have an action plan, we conduct training and follow-up our work to ensure we are working with the right things and addressing our problems. It feels like we’ve started to roll a snowball that’s getting bigger and bigger. If we keep working, the damages will continue to reduce since we have just begun working with the chain of many moments that will help us avoid damages.” says Anna.